A final surprise, just before the dawn of the new year. The last day of 2021 brings the release of my latest Machinima project: Experience. And this time, I'm not alone! The film was made in collaboration with German game developer pixelsplit. Experience takes place within the game Virtual Rides III. A game released in 2017 by pixelsplit in which you are fully able to customize and control over 20 real-life funfair rides, to any way as you see fit. This 9 minute film shares an exciting point of view of the fairground through a visual study approach from a multitude of angles, and perspectives throughout day and night (even while on the rides!) The film highlights the premises of the fairground, the visitors, the stalls, and of course all the rides. Did I already mention that every single ride's backdrops, fonts and colors were handpicked and customized? Every single ride has their own color pallette, designated font, and custom-made backwall images with either self-made work or airbrushed stock image compositions. My favorite one? The 'emperor' ride. I did not know that Purple and dark blue could suit a Schwarzkopf Monster III so well.

The project was almost two years in the making. Our fruitful collaboration started in late february 2020 with a simple proposition, and evolved into a fully fledged script and amazing looking endproduct. The recording process was finally started in early spring of 2021 on five different computers; out of which 2 windows computers and 3 macs. Can you tell the difference between the footage? Experience was originally coined as an idea a few years ago in 2016 when I decided I wanted to make a visual study of a real life fairground, and place additional focus on the lights, atmosphere, people, people flow, and the rides themselves. Inspiration was also found in a documentary idea I had carried with me with as long since 2010, during which I was researching the possibilities to make a full-length documentary of the local fair in the village I once lived in. Also, ever since I played VR3 since its release in 2017, I wanted to do something with a film inside of this magical environment.

After I recorded the first batch of footage, the trailer was released in march 2021 to make our collaboration official to the world. After the trailer was released in march of 2021, the early offline edits were shared with the team over the summer. The second batch of footage was recorded at the end of 2021's summer to counter some of the dominant screen time some rides had in comparison with others. Some rides were shown a lot of times, while others would only be featured once or twice. The second batch of footage had to counterweight that issue and give the film a bit more of a balanced look and feel.

During the fall of 2021 was when the real exciting stuff happened. Turning pieces of footage into a lively sounding funfair. The online editing and audiomixing took roughly a couple of weeks to complete, and hence, at the beginning of december, Experience was born! As a ProRes file, that was, waiting to be released.

Especially the many screenings with the team were those little moments when we finally started to realize that Experience was a reality and raised our excitement; it was finally close to being finished and it became something in its own to us. The audio track combines audio from the game and almost the entire discography of artist 'FEX'. Many of his wonderful Drum 'n Bass, electronic, atmospheric and experimental tunes can be heard throughout the film. Johannes, thank you so much for letting us feature your wonderful music. Please find a direct link to FEX's soundcloud and Spotify on the bottom of this page. In addition, I created custom color-grading templates for all of the shots as well to make the colors truly pop out and to exceed audience's expectations. Since the game favors a bit of a yellowish/greenhish hue, my purpose was to counter that particular hue and bring a new dimension to the grade. The film does not include the 'Forge' (energy storm ride); the newest ride that was released last week just before christmas. Last but not least, I would like to thank the entire pixelsplit team for the wonderful collaboration we have had the past two years. I hope we can work together again in the future.

Enjoy our latest collaboration, and have a happy new year!

Produced by A Pixelated Point of View and pixelsplit

Third-party images were obtained from within the public domain. Fonts and other external assets were used lawfully and accordingly towards the license it was obtained with. 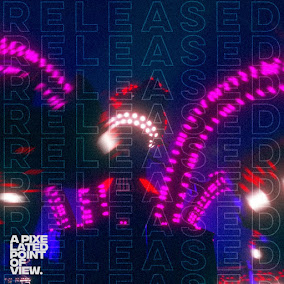